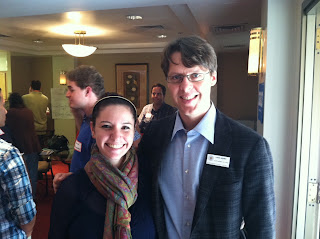 Today I spoke to an energetic group of Democrats active in the
Montgomery County Obama campaign and also Democratic clubs. It was a
great turnout, particularly for 400 days or so out from the election.
My high praise for Jonathan Prutow and his co-conspirator Lisa Jerrum
who put it together along with Jon Randall, who never slowed down
organizing the County after 2008.

My comments focused on the need for Democrats to get their backs up
and get focused on winning. Not whining. Obama has done terrific work
despite an opposition that would sooner destroy our government than
compromise. And he has had to contend with a 60 vote requirement in
the Senate, which is untenable for democratic government to work
properly. Next time you hear a progressive complaining, turn that
conversation around and get them on board! The stakes are too high to
let morale slump.

Here I am with Sarah Wolf, one of my best staffers and organizers in
my 2010 campaign.