The morning began with a meeting on the topic of the Metropolitan Branch Trail. At a recent T&E committee meeting I learned that the nonprofit group that manages the historic B&O Train Museum has reversed its position and now refuses to grant the county right of way for the Metropolitan Branch Trail. This is very unfortunate as community and elected leaders rallied behind funding for the restoration of that museum partly on the grounds that it would provide an excellent community asset on the trail. This is an issue we will return to in the capital budget process in January. If you ride the Red Line you may notice how much progress DC has made on the trail — and that the progress seems to stop as you cross into Montgomery County. This segment of the trail is an important issue that needs to be resolved in order to continue forward.

The discussions with the team about organizing for the town hall we are hosting on December 12 as well as policy issues related to economic development.
At noon, a meeting with officials from the Housing Opportunities Commission to discuss how to improve production of affordable housing. The council is going to consider a new housing policy in January, although that is more of an aspirational document. I am looking for some concrete steps we can take to support affordable housing production.
Then a meeting with Dick Lipsky, manager of the MCPS TV network, as well as Neil Greenberger, the council staffer who manages our part of the county cable network. We talked about ideas for the future of the cable system and continued the follow up from our last Gov Ops committee meeting, where the focus was on building the system we really want for the future. The cable groups have been discussing a new governance model, which is a helpful step. We are contemplating various recommendations for moving forward and I think there is growing consensus that significant changes are needed.
Next continuing discussions about economic development policy and how the county can be more effective in how we market the county to companies and grow our job base. We’re going to see a lot of policy initiatives next year on this topic and I am very optimistic about where we are headed.
Have a happy thanksgiving everyone!

Today started in the Takoma-Langley Crossroads area for a meeting with Erwin Mack. He runs a small business improvement effort in that area and they are working on the Purple Line, the sector plan, and many issues. Erwin is also head of the county’s pedestrian and bike safety committee. We discussed the recent T&E committee meeting about safety for kids walking to school and some follow up that I am considering.

Then, a Gov Ops committee meeting at 1030 focused on technology issues.

The rest of the day went to a collection of items I’m working on. Economic development, particularly. I was surprised to see another multi-million dollar economic incentive request on my desk from the county executive. 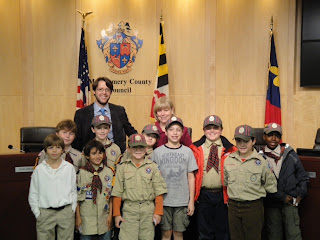 The photo is from a quick meeting today with a group of Webelos. My favorite moment: in response to Nancy Floreen’s challenge to correctly say how many people live in Montgomery County, we had a very thoughtful and persuasive young man pronounce, FIVE thousand!! “NO,” the next one said, “NINE thousand!“

Now I am on the couch… Emailing and watching MCPS TV, trying to get a better sense of what we offer through our county cable channels.

First thing this morning I was briefed by council policy experts on the draft of their report on MCPS “category 12” expenditures. You’ll recall this as the debate from earlier in the year where the council reduced funding on health spending for MCPS and recommended that MCPS absorb the cut by reducing the share MCPS pays for health premiums by 5% (from 95% to 90% for HMO’s, for example). MCPS did not implement the council’s recommendation and instead absorbed the cut in funding by tapping a large surplus in the benefit fund that the council was not fully aware of. The council will receive the final report at the end of November.
Then into a Gov Ops committee for several hours of nuts and bolts discussion on technology and the county cable plan. The cable discussion was particularly interesting. I worked hard last year to find several million dollars in savings in the cable plan in order to fund other critical priorities in the county, such as public safety, libraries, parks, and health services.
The county collects 5% of the revenue that telecomm companies (Verizon, Comcast, RCN) earn from using our right of way (i.e, wires on our streets, etc). The question is, how should we use this money?
One of my first priorities, consistent with the Open Government agenda that the Gov Ops committee has been developing, is transparency in government. Today, not all council committee work sessions are recorded on video, and I think they should be.
What principles do you think should guide these discussions? What do you know about our cable operations today and what suggestions do you have?
The outcome of the committee meeting was potentially profound, as one of the managers for the MCPS cable operations, Dick Lipsky, stated that we need to stop focusing so much on what cable has been in the past and start asking ourselves, if we were going to build it today, what would it be?

That is exactly the right kind of thinking and it is what we are going to pursue.